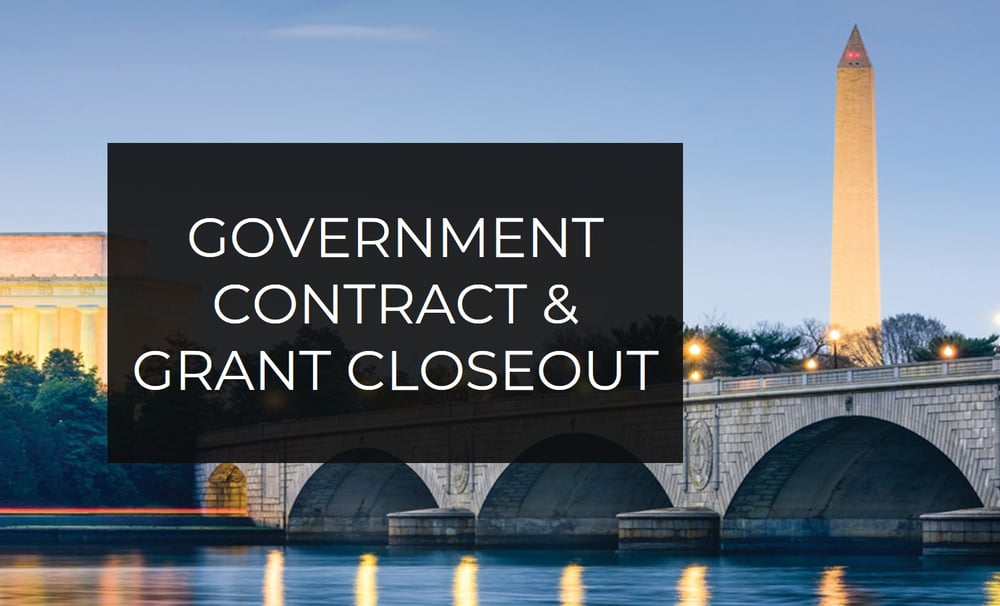 At the end of an award, the Federal Government has processes to make sure its contractors and grantees have complied with requirements, including clauses and referenced requirements contained within these clauses. This is known in the Government as a “Closeout”. The Government has numerous written procedures for its personnel to follow to complete a Closeout. In the Federal Acquisition Regulations, used for contracts, these internal Government procedures are contained in FAR 4.804-5 “Procedures for closing out contract files”. For grants, the source of direction for Government personnel to follow is spread out and varies from agency to agency. Thus, for a grantee, an understanding of one’s agency’s closeout requirements can be different from another.

For contractors, FAR 4.804-5 is a good source to see what the Government will ensure its contractors have completed. While this can be valuable to see the scope of what might be required from a contractor, it might cover items that are not applicable to a particular contract. All the required items are stated in the contract somewhere. Finding them requires a detailed review of the contract if that has not already been done. The Government has follow-up systems for some of the requirements of the contract. An example is the email (and follow up emails) sent out for Invention Reports (Form DD882-Report of Inventions and Subcontracts) for contracts that contain the clause 52.277-11.  Other requirements called out in the contract do not have follow up systems. At some point, the Government will “Closeout” the contract even if some contractual items have not been completed. This can take years. In the meantime, the contractor will remain liable for undelivered or incomplete items. One critical time frame concerns the allowable cost claimed for cost reimbursement contacts. The Government has 7 years from the date of the contractor’s last claim for cost sent to the Government to make a final unilateral determination of the allowable cost. If the unilateral decision is not made by then, the Government is obligated to pay the claimed cost.

Just for a sense of the items the Government checks for on contracts, the following list is from FAR 4.8.

FAR 4.804-5 lists the items which the contracting officer must verify during the closeout process:

This list is all encompassing and must be applied according to the contract. For example, item 7 “All interim or disallowed costs are settled” does not a apply to a fixed price contract. Items 9 and 14 have a certification by the contractor associated with them. A number of these types of decisions come into play during the closeout process and is too long for a discussion in this blog. The Government plans for a period of up to 3 years after the end of contract to get closeout accomplished.

The website Grants.gov defines Closeout as “The process by which the Federal awarding agency or pass-through entity determines that all applicable administrative actions and all required work of the Federal award have been completed and takes actions as described in 2 CFR 200.343 Closeout of the OMB Uniform Grants Guidance.”

Grants are more confusing than contracts and it can be especially difficult to understand the unallowable cost and the correct allocation of indirect cost associated with grant work. The most worrisome potential non-compliance is the issue of the cash issued by the Government to the grantee. This confusion is caused by the minimally examined procedures for obtaining cash from the Government. The lack of detailed examination of a grantee’s cash withdrawals and periodic audits by the Government causes a grantee to think they are doing things properly. There is substantial liability associated with not getting the numbers correct. So, if you have not done this before, get some expertise to help you (ReliAscent® offers contract management and administration consultation services to our clients and all small business government contractors, on a monthly or as-needed basis).

In addition to the financial aspect of grant closeout, property disposition is required. Certain agencies may even require some special items during the closeout of a grant. These are not covered here because the considerable variation between types of grants and different agency issues.

An Introduction to Indirect Rates for Government Contractors

An Introduction to Government Property Management

What is the difference between the DCAA and the DCMA?

Can I use QuickBooks for Government accounting?