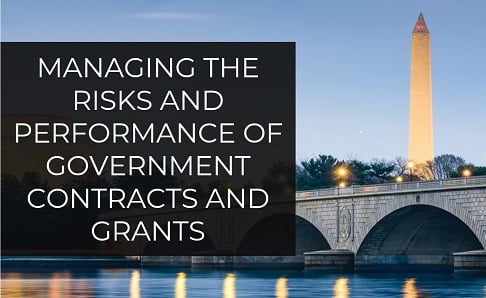 The administration of federal government awards starts with signing the contract by both parties, or the acceptance of a grant by a grantee. Government Contract Administration is the fulfilling of the requirements of a contract or grant and the avoidance of actions that are not permitted by the award. Knowing what these are is complex since federal awards refer to terms and conditions that can number in the hundreds. Some of these conditions have sentences so long that the subject, verbs, and object have to be singled out to make sense of all the modifiers in the sentence.  They also contain language and concepts that are rooted in history that is not obvious to first-time readers. So, it is generally good to find someone experienced in government contract management and administration to understand the background, the applications, and to explain some of the nuances. The contract administration discussion below is oriented to research and development contracts or procurement of technical systems for the federal government. This is in contrast to the procurement of commercially available supplies and construction contracts.

Big companies and large institutions employ specialists to handle the administration of a federal government contract or grant because of the complexities. These employees are typically called Government Contract or Grant Managers. These organizations generally split up filling the requirements of an award into specialty jobs. These are the Program Manager/Principal Investigator, the Project Cost/Schedule Administrator, and the Contract/Grant Manager. The Program Manager is responsible for the product or service delivery to the satisfaction of the customer or, at a minimum, the requirements of the award, and coordinates technical requirements with the Government Technical Representative. The Project Cost/Schedule Administrator is responsible for tracking the cost of the project and reporting to the customer as specified in the contract, and for tracking and reporting the schedule by task. Some awards also require earned value system reporting; a very complex system to maintain (it is typically implemented and maintained by this function). This person coordinates with the Program Manager and customer’s Cost Analyst. The Contract/Grant Manager coordinates with the Contracting Officer and the Contract Administrator.

Small companies often have only a Program Manager or Principal Investigator to handle these duties. However, small companies don’t often get awarded the very big contracts and grants that have some of these large & complex situations (that have so much work that one person can’t do it all on their own). Nevertheless, all contracts and grants, even small ones, can contain hundreds of clauses and conditions.

Government grant conditions are substantially more difficult to understand than contract conditions. This is caused by a grant being considered an award to help a company or institution achieve a result that contributes to the future well-being of the organization receiving the award. As a result, since there are no deliverables that the government wants, the company must follow the rules laid out in the Code of Federal Regulations (CFRs), called out by the granting agency, instead of a mutually agreed upon set of terms and conditions called out in a federal government contract. The CFRs are not categorized by the rigid requirements in the clauses of the Federal Acquisition Regulations (FARs) that call out in the contract specific FAR clauses. The CFRs are referred to by a few sentences in the grant document that leads to hundreds of pages of rules and guidelines. The CFRs are generated by a number of different agencies with emphasis on different issues. This results in confusion about which conditions apply and which do not. The clauses in contracts, while complicated, are specifically selected for the contract that was signed (so a company is clear what applies to its conduct and actions).

The major item about which to be cognizant are conditions in the contract/CFRs that can result in:

Award termination usually starts by missing schedules or tasks. It can also happen when the company makes threats or creates conversation with government personnel that delivery might not happen unless the government does something to remedy a problem that is being caused by the government. This condition is covered by a default clause such as FAR 52.249-9 Default (Fixed-Price Research and Development) in the case of a fixed price contract. For a grant, an award termination can occur if the company begins reporting information that causes the government to question if the grantee is following the statement of work.

If the government has caused the problem, don’t make statements that deliverables might not be made on timely basis, or threaten to stop work. Use other means to get the government’s attention such as a submitting a constructive change / requesting a change order. But, keep working even if you must slow down to figure out a work around.

Not adhering to the cost principles the government requires its contractors to follow can result in the government stopping payments or starting an investigation by the Inspector General of the agency. These principles are refined for a specific company by evidence to the government that the accounting practices follow these principles. DoD or NASA contracts’ evidence is often handled by the Defense Contract Audit Agency (DCAA). For other agencies, the evidence is often presented to a working group of that agency. The coordination of this effort is normally the job of the Contract/Grant Manager with assistance from the accounting department.

Another especially concerning situation is the application of laws such as the False Claims Act. While not necessarily spelled out in a contract, the False Claims Act applies to a government contractor along with a handful of other laws that are applicable to all citizens and legal entities. In contracts, as a basic principle, the government is not bound by civil law. So, it writes all the agreements between itself and the contractor into the contract. This is not the case with grants. With grants, the government refers to the Code of Federal Regulation for general guidance to a grantee. This guidance, if not followed, can be used to take action against a grantee. With a contract, the government is bound by the clauses in the contract. If the contractor holds up its end, the government must hold up its end. Familiarity of these nuances (basics of federal contracts and grants) is another duty of the Government Contract/Grant Manager.

Many other aspects of government awards concern the requirements that contractors or grantees:

Thus, a Contract/Grant Manager must have awareness of company activity on the awards within that manager’s purview to ensure the conditions of the award are adhered to. These requirements, if violated, can have serious consequences including termination of the contract. So, the Contract/Grant Manager must communicate these requirements to the company personnel that carry out certain activities such as purchasing and technical consultant engagements.

A third area of contract and grants requirements are the socio-economic clauses that seek to get contractors and grantees to carry out the government’s social programs to enhance the economic well-being of certain types of people (such as small businesses). These requirements, such as purchasing from small businesses, can be quite a lot of effort for large businesses, so many set up special programs to implement them. Many of these requirements are not applicable to small business. The applicability of these clauses is often based on the dollar size of the Federal award. So, the Contract/Grant Manager must know these limits as well.

A fourth area are reports called out in a contract but are not related to the research or a deliverable. The Contract/Grant Manager is responsible for finding these in the contract and alerting company personnel that have the specific knowledge for these reports. Then the Contract/Grant Manager must ensure the reports are sent to the correct Federal Government recipient. An example is the patent report required in all research and development awards.

The final area of concern for the Contract/Grant Manager is the flow down of some of the clauses in the government contract to subcontracts/subawards. The requirement to flow down clauses is specifically called out in the prime contract/grant. Reading the clauses is required to know if flow downs are applicable. It is also the responsibility of the Contract/Grant Manager to know if other flow downs to a supplier might be needed to protect the interests of the company. An example would be certain intellectual property clauses that the government requires to be able to use the intellectual property of the supplier.

Certain tools to help make sense of the contract or grant can include:

The format of the brief can be critical concepts of a contract with a brief note and award page/CFR reference in each of these categories; as the award is reviewed page by page, clause by clause and CFR by CFR. This gets requirements for a single critical issue in one spot. This brief can be shared with others in the organization that need directions contained in the award and it can serve as a directory for later reference.

In summary, the Government Contract/Grant Manager is expected to be the expert on the meaning of the terms and conditions of an award and all its requirements. That person is typically also responsible for the interface with the Government Contracting Officer, ensuring the company is aware of the award requirements, and monitoring progress on the requirements throughout the period of performance. For small companies, one person can be responsible for all the performance on a contract, fulfilling all the deliverables, as well as all other award requirements. This can be a taxing amount of work and require an enormous amount of time reviewing government award background to understand the level of risk involved in performing a government contract or grant. Unfortunately, many small businesses do not possess the level of experience, or simply have the time or personnel to handle this critical task, and this can open them up to significant financial and legal problems. Don’t let this happen to your business.

To learn more about our outsourced Government Contract Management services—and why it’s important your business has an experienced accounting AND consulting firm like ReliAscent to guide you—contact us today.

Introduction to Government Contract Management - Part I: The RFP Review