Your Source for DCAA & FAR Compliance News and Discussion

In our DCAA Blog, we discuss the latest government contracting news from the Federal Government, the DCAA, and DCMA, as well as promotions offered by ReliAscent, and helpful tools and resources for contractors.

We hope you will visit and take part in the discussions on our blog on a regular basis. If you ever have any questions or would like to discuss how our experts can help, do not hesitate to contact us at any time!

ReliAscent Releases Our Second Newsletter of 2017 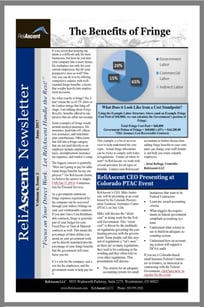 Over the last several weeks, ReliAscent has learned some (potentially) disturbing and important news regarding Government Contractors using the Deltek GCS® accounting system.

I think everyone has heard of the issues of major corporation computers being hacked into and information stolen. The first big example I remember on this was last year during the holiday season when the Target stores computer was hacked and identity information of some 40 million customers was exposed. In June this year, P.F. Chang’s restaurant reported that transactions from September 2013 until now were also potentially stolen. UPS announced in August that 100,000 transactions from January thru August of 2014 were potentially opened, exposing not only credit card information but names, addresses and e-mail addresses. At the end of August, Home Depot reported their computer was hacked into and credit card transactions at their stores from the period of April thru August of 2014 were exposed.

So what is my point? All of these companies are retail outlets and it makes sense that computer hackers might look to these systems to steal information. I think there are two points. First, this seems to be a recent trend that we haven’t seen before. It means that we need to be more vigilant in our efforts to keep computers and data on those computers secure. Everyone talks about security and confidentiality of data but these large corporations were caught by surprise and smaller businesses that don’t have the resources of a large company are vulnerable as well, perhaps to a larger extent. The second point is this trend has made it’s way into the government contractor market as well. In August, a Department of Homeland Security contractor had a computer breach. This contractor was providing background checks for the DHS and potentially exposed a number of DHS employee’s information. The FBI is currently investigating this. Again, last month it was announced that there was a breach in the Deltek computer system used for timekeeping. This breach exposed many defense contractor’s data. The contractors may see erroneous entries in their personal account or changes in balances. This breach occurred back in March but only recently has been publicized. The FBI is also investigating this breach. It is rumored that an arrest has been made in this case.

Traditionally software was either designed to meet DCAA requirements or, if it was not, there were external engines required to make the system compliant for DCAA accounting.  Most of the software designed specifically to meet the DCAA requirements was software that only larger companies could afford, like Deltek Costpoint®, Sage MAS90® and other similar systems.  As the government focused on gaining more business from Small Business, these systems appeared to be a barrier for Small business to gain entry into the marketplace.  For this reason other systems became popular.  Deltek purchased a company and came out with a program that looked, felt and did a lot of the same things that Costpoint did but was less expensive.  Deltek marketed this software for Small Business under the Deltek GCS Premier® brand.  This was still fairly costly for the very small businesses.  Most of these small businesses were drawn to simple and efficient software like Peachtree® and QuickBooks®.  Since these programs were not designed to meet DCAA requirements, some adjustment was required to make them a part of a DCAA compliant accounting system.  Usually things like a compliant timekeeping system and a system for calculating indirect billing rates and creating complete job cost reports were done outside of the accounting program.  These "add ons" were necessary to complete the software system and then policies and procedures were required to make a complete system that was compliant.  If the person putting together the system did not have extensive experience in government contracting, and specifically with DCAA compliant accounting systems, the chances of the system being capable of passing an audit were reduced.