Mike Anderson June 28, 2011
Most people don't understand what qui tam is.  Qui tam is a Latin phrase that means "he who brings a case on behalf of our lord the King, as well as for himself".  In essence, this is the provision in the False Claims Act that allows for a taxpayer to blow the whistle on a fraudulent act by a government contractor.  Three components have to be present for a suit: 1) There must have been a "claim" against the United States. ("claim" is usually a request for money or property), 2) The "claim" must have been false or fraudulent & 3) The "claim" must have been made knowing the "claim" was false.  The Act was first put into service around the time of the Civil War to help stop acts like selling the government diluted gunpowder (diluted with sand) and cases marked "muskets" that were filled with sawdust.  The act itself has been revised several times and there have been several unrelated acts that have given additional strength to the act itself.  For instance, the 2010 Healthcare Reform Law contains an amendment that makes it easier to prove the "whistle-blower" is an "original source" and thus easier to prosecute a False Claims Act case.  The attached graph is very interesting as it shows the overall growth in settlements and judgements for False Claims by the Department of Justice. 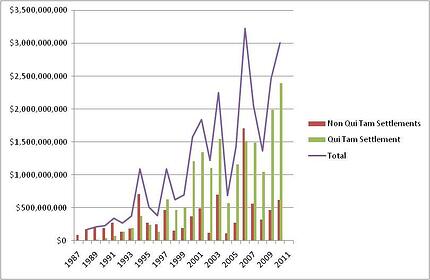 You can also see a significant increase in the settlements that were initiated by qui tam disclosures.  You may also notice that the total number of settlements is growing.  It should grow even more as the government focuses on eliminating waste in the budget.  Contractors should always be aware of this tool from the government side and strive to avoid situations that could result in such a claim.  We have seen False Claims suits brought about due to errors in accounting systems.  Visit this website to see a list of the types of fraud investigated recently.   Ignorance is really no excuse either.  At Tech Biz we go out of our way to keep our clients from making a False Claim.  As a contractor you should be aware of the rules and take positive actions to avoid any possible False Claim.

Does the government encourage the Small Business Contract?